Cannonball, ND – After nearly a year of struggling against the Dakota Access Pipeline’s construction underneath the Missouri River, water protectors are now scheduled to be evicted from their main encampment. [Watch our LIVE updates below]

UPDATE Thursday, February 23rd, 11:45AM: A large militarized force has moved into the Oceti Sakowin main camp. We are streaming live on “Cam 1” which is embedded below, or directly on Livestream here. Armored vehicles and riot police are moving around the camp, as many camp participants and medics have evacuated across the frozen Cannonball River to the Rosebud Camp.

As of Wednesday afternoon, the encampment, on unceded Fort Laramie Treaty land and maintained by the Army Corps of Engineers, has a few hundred water protectors still holding steady as the eviction looms.

Ceremonial fires have been raging throughout the snow-filled morning.

For our LIVE feeds from the muddy encampments, see below. If we are not live at the moment, click into the ‘event posts’ (play button) on the top right of the stream for today’s videos.

We spoke with an Indigenous elder in the late morning who talked about passively resisting the scheduled eviction, saying,

Watch the interview below:

This is a sacred site and we are protected by federal statutes … forcefully removing us from treaty territories is another violation. Again, we are here in peace and prayer, we are supposed to be protected and we’re not. We’re going to resist, and it’s passive resistance, we’re not going to fight them. At the same time, we’re going to be praying for them and their families for this water, that they need, that we all need.”

With less than an hour before the set eviction time of 2 p.m., many water protectors marched south out of camp towards the Cannonball bridge as more fires burned.

With less than ten minutes before the scheduled eviction, the north gate into camp was blocked with metal barricades and the security shack was lit afire.

The scheduled eviction time of 2 p.m. came and went with no loud announcements by the police. Since then, groups of water protectors and law enforcement have had discussions on Highway 1806.

More wood structures were lit on fire after 2:30 p.m. CST.

A video update from 2:50 p.m. shows fires still raging across camp with a small amount of water protectors left, riot squads readying on Highway 1806, and the media taking it all in.

After an hour and a half past the scheduled eviction time, police still had yet to enter camp and Army Corps representatives stated that they are scheduled to clean the camp at 9 a.m. tomorrow.

Watch the conversation with the policy advisor for Governor Burgum that happened on Highway 1806 around 3:30 p.m. below:

A bit after 4 p.m. CST, police officers led by the Wisconsin State Patrol started to make arrests of people on Highway 1806, including a Rabbi, legal observers, and journalists.

The person seen in the above picture being tackled by Wisconsin State Troopers and Morton County Sheriffs has been identified as Eric Poemz. While he was attacked he was livestreaming through his Facebook and can be heard screaming in pain after being tackled to the ground and saying he thinks his hip is broken.

There have been 10 arrests so far today according to Dennis Ward from Aboriginal Peoples Television Network.

At about 5 p.m. there was an update given by two water protectors who were acting as the police liaisons.

There’s no negotiating anymore, there’s no ceremonies, they’re just gunna come and arrest. But they’ve given us one last opportunity to say ‘hey we want to leave’ and if we leave then we won’t get arrested.”

They went on to say that the Army Corp of Engineers won’t be entering the camp to do any cleaning until the area is clear of people.

Meanwhile mainstream media ABC has been allowed to stand with the police and will not be arrested.

KFYR-TV, a local NBC and FOX affiliate for the Bismarck-Mandan and Dickinson, North Dakota region, was live for a press conference with North Dakota Governor Doug Burgum, Morton County Sheriff Kyle Kirchmeier, and other state and Army officials about today’s eviction.

It’s our desire that people leave voluntarily from the camp and at 9 o’clock tomorrow morning. It’s our intention in a coordinated way again with the state of North Dakota, Standing Rock Sioux Tribe, Army Corp of Engineers, to enter the Oceti Camp and continue the clean up efforts that we’ve begun in the last few weeks.” 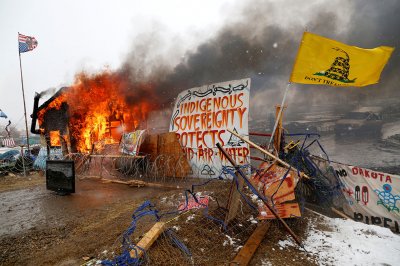 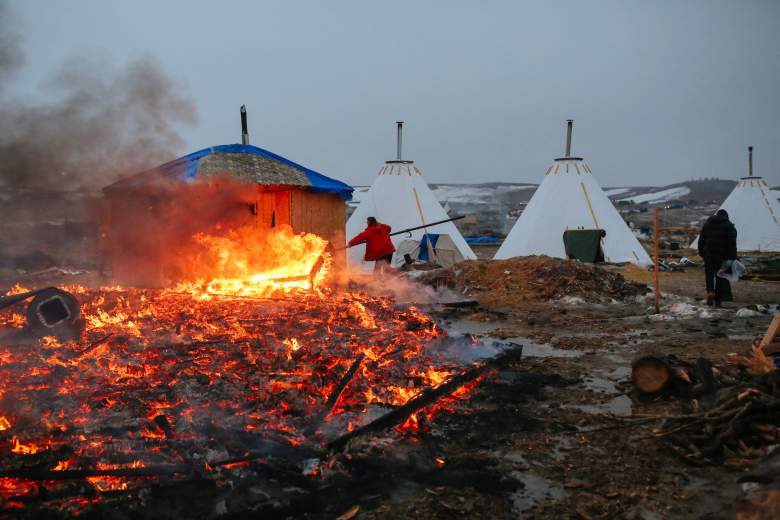 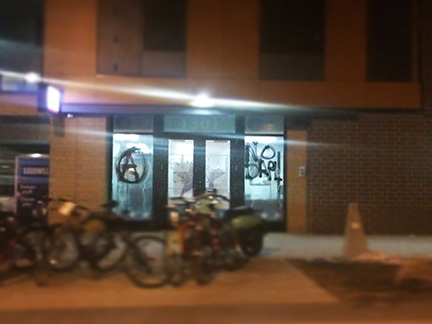 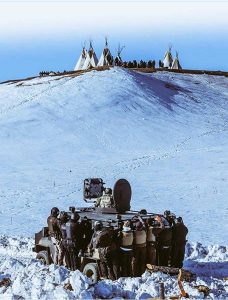 Following our earlier report from Standing Rock on the police raid of the Last Child camp, reports began to roll in that police had taken down tipis and burned whatever remained.

Some of the livestreaming of these incidences was blocked, but what we have been given is as follows.

Please watch and help us get the word out.

Johnny Danger live streamed from the site of this injustice…

Chase IronEyes has been arrested!!!! And the police have been taking down tipis on new camp!! Because its on private land.

Help get the word out and show that you STILL STAND WITH STANDING ROCK!

Article by Screaming Wolf; original image composite created from movie Bury My Heart At Wounded Knee; used for illustrative purposes to draw the analogy to the ethnic cleansing still happening today. Image was removed after far too many people failed to read this note that it was a stock image.

something raw from home….++..we're gonna have to raise our medicine feathers high.. tighten up security.. let go of pride stuff of the ego and PROTECT… because it is about the future generations. all, of this..we have shown the power we have when we use our creative intelligence…our phones, cameras, guerrilla art, music, visual arts and the songs… the power is of us. Starving the beast is effective…We must out think this and think everything through because they are manipulating the realities around us…We are the power, this is what we've been preparing for… We change this, now… Turtle Island must be liberated….(this video was put together by a fellow water protector that has been on the ground day in and day out since summer..@Brian Sorbo. song is called Media Black Out…)…++check out this link: www.defunddapl.org or DeFund DAPL#OCETISAKOWIN #SACREDSTONECAMP#BLACKSNAKEKILLAZ#FREEREDFAWN#NODAPL#WATERISLIFE#TURTLEISLAND#MEDIABLACKOUT#cempoalli#DEFUNDDAPL